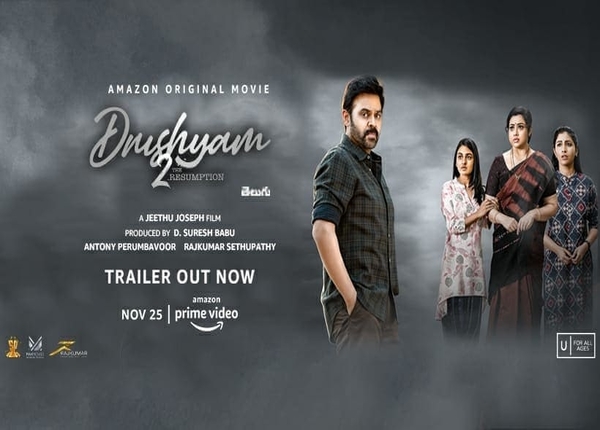 The makers of ‘Drushyam 2’ have released the much-awaited trailer of the sequel to the Telugu superhit ‘Drushyam’ (2014) and superstar Venkatesh Daggubati is excited to take the audiences on an “emotional yet exhilarating journey”.

Expressing his gratitude for all the love, Daggubati shared, “We are thankful to all our fans, audiences, as well as critics from across the globe for having given us so much love and adulation. The response we have received–and the cult-status ‘Drushyam’ achieved–was unprecedented, and gave impetus to all of us to take the legacy forward with ‘Drushyam 2’.” Further, he talked about what the sequel has in store for the excited fans.

“With the sequel, we intend to finally put to rest all theories that our fans have been sharing with us over the years about how and what could have taken place in Rambabu’s life as he strode ahead, having sworn to protect his family. Drushyam 2 will take audiences on an emotional-yet-exhilarating journey, with the twists and turns in the plot that keep the suspense alive, and our viewers yearning for more,” he added.

The two and a half minute trailer reveals that the sequel takes off from where the first film ended, onto another roller coaster journey, as Rambabu’s (Daggubati) family is threatened by an investigation into the events of the past.

Jeethu Joseph, the writer and director of ‘Drushyam 2’, shared that he always wanted ‘Drushyam’ to have a sequel.

“‘Drushyam 2’ is very close to my heart. Over the years everyone kept asking me whether we would be coming back with a sequel, and I always knew that I had to bring the epic franchise back to the audience, but I believe everything has its own right time,” he shared.

He further talked about the energy and passion that went into creating the vision into reality.

“After changing my mind a million times on how to proceed with the story, and eventually working very hard to convert this vision into reality with the support of all my cast and crew, I am now ready to bring this film to our audiences, and we can’t wait to hear their reactions. Joining forces with Amazon Prime Video is just icing on the cake for all of us,” he added.