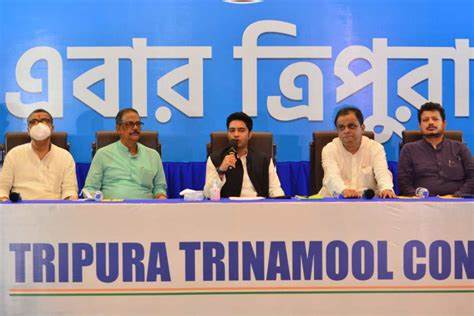 TMC Rajya Sabha MP Sukhendu Sekhar Roy announced the manifesto and said that the Trinamool Congress would work hard for the development of the prestigious Agartala Municipal Corporation areas.
He said that the TMC if voted power in the AMC, will ensure that residents receive better amenities, at least two bio-toilets in every ward, better markets equipped with fire and disaster management facilities, eradication of all dark spots with enough lighting, tax rebates and direct access to the Mayor through “Hello Mayor” initiatives.

He said, “The manifesto reflects TMC supremo Mamata Banerjee’s way of thinking for the people and how the Bengal government reaches out to people with its welfare schemes. The attitude of the AMC board will be similar to the people-centric TMC government in Bengal.”

Later addressing a press conference, TMC Rajya Sabha MP Sushmita Dev said, “If polls are conducted in a free and fair spirit with zero intimidation from the end of the ruling party, all the Trinamool candidates shall form the board of Agartala Municipal Corporation.”

Dev also did not rule out any possibilities of coming to a pre-poll arrangement with the regional political parties like former Congress leader Pradyot Kishore Dev Barman-led Tipra Motha and said that the first priority of the Trinamool Congress is to oust the BJP and for that doors are open for like-minded parties. Although she did not specify the name of any party but did give enough indications of a pre-poll alliance with like-minded political parties in the run up to the 2023 assembly elections.

She said, “Mood of the people in Tripura is that they don’t want the BJP. People who are in mass politics like us and who are in other parties are well aware of that. Now, respecting the mood of the people, we shall stand with the parties who will agree to come with us for BJP’s ouster.”