The family members of Chief Minister K Chandrashekar Rao will be attending the ‘Maha Kumbha Samprokshana’ ceremony of the temple. The entire cabinet will be present on the occasion.
The architectural masterpiece has been constructed with 2,50,000 tonne black granite. The temple exhibits a fusion of both Dravidian and Kakatiyan styles of architecture.

Speaking to ANI, Geeta, Temple Executive Officer said, “After the formation of Telangana state, the government decided to reconstruct the Yadadri Lakshmi Narasimha Swamy Temple, under Yadagirigutta Temple Development Authority (YTDA). The YTDA planned and reconstructed the temple and the work started in April 2016.”

“A makeshift arrangement was made for deity Lakshmi Narasimha Swamy in another temple in April 2016 and now on March 28, ‘Maha Kumbha Samprokshana’ will take place as a part of the reopening of the refurbished temple complex,” she added.

Anand Sai, the chief architect of the temple said, “The ground area of the temple has been increased from 11 acres to 17 acres. This is the biggest temple in the world that has been constructed completely with stone.”

It also has a sculptural representation of Lord Narasimha breaking out of a pillar to kill Hiranyakashyapa, followed by tearing apart the chest of the demon king. 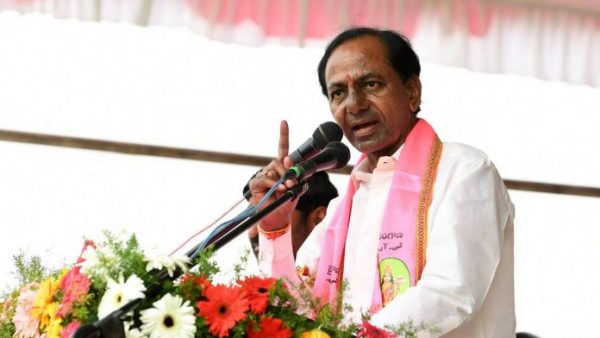 The seven ‘gopurams’ of the temple are unique because from the bottom to the top, they are made entirely of stone. The Maharaja Gopuram which lies on the western entrance is 83 feet tall and is made of 13,000 tonnes of black granite, which took over two years to be constructed.

There is a proper concrete shed built to park the ‘Ratham’, and there is also a ‘Golla Mandapa’ built outside the temple, apart from ‘Praakara mandapa’ and others.

A temple for Lord Shiva has also been constructed on the hillock.

The devotees can also see the ‘first Praakara’ around the temple as they head out of the main temple, where 58 Yalli pillars have been set together. These pillars are sculptures of Lord Narasimha with the face of a lion and the body of a horse supported by an elephant. Each of these pillars has been carved out of a single black granite stone.

The ‘garbhalaya’ door of the temple is 11 feet high, with a golden Nava Narasimha Swami design. It leads devotees to the sanctum santorum.

The temple has statues of the 12 Alwars representing the Kakatiyan style of architecture, which is installed around the Mukha Mandapa leading to the sanctum sanctorum, which is located 18 feet below the ground.

The temple is quite spacious as it can accommodate 10,000 devotees at a time. A waterbody has been filled where devotees can take a holy bath.

The reconstruction of the temple has been made at a cost of Rs 1,280 crore in the past five-and-a-half years. More than 2,000 sculptors and thousands of workers have been engaged in the reconstruction work, which is still under progress.

Elaborate arrangements have been made by the officials for the conduct of ‘Maha Kumbha Samprokshana’. The authorities are making the necessary arrangements to handle the large number of devotees who are expected to arrive on Monday.

The temple management has set up an automated and mechanized prasadam production unit atop the hill.

It is also learnt that the devotees visiting the temple in Yadadri can get unlimited laddu, pulihora and vada prasadam at the temple. (ANI)