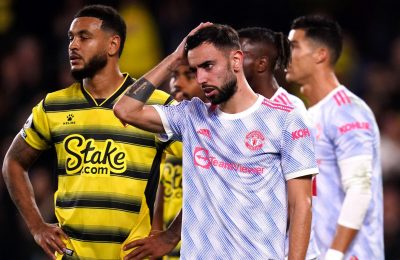 Watford [UK]: Manchester United’s woeful run continued in the Premier League on Saturday as the Red Devils lost against Watford.Watford defeated Manchester United 4-1 on Saturday and now Ole Gunnar Solskjaer’s club is positioned at the seventh spot in the points table with 17 points from 12 games. For Watford, Joshua King, Ismaila Sarr, Joao Pedro, and Emmanuel Bonaventure got on the scoring sheets.For Manchester United, Donny van de Beek registered the lone goal.Watford managed to score two goals in the first half while United pegged one back in the second half.However, Pedro and Bonaventure put the final nail in the coffin in the second half, and as a result, Watford emerged triumphant.Watford is now at the 16th position with 13 points from 12 games.