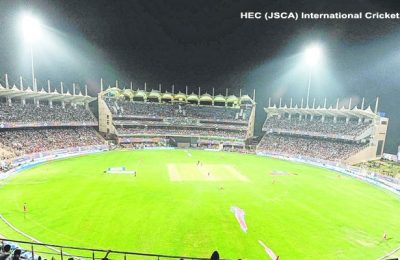 Ranchi (Jharkhand) [India]: A Public Interest Litigation (PIL) has been filed in the Jharkhand High Court against the full capacity permission of spectators at JSCA stadium for the India and New Zealand T20 match. The petitioner, Advocate Dheeraj Kumar on Thursday asked the concerned authorities such as the Jharkhand Chief Secretary, the Director of Disaster Management Department and the Jharkhand Cricket Association, why the government allowed full occupancy in the stadium whereas temples, courts, and other places are allowed with 50 per cent only.According to the PIL, allowing a hundred per cent capacity of spectators is risking the lives in the view of COVID 19. India and New Zealand will play the second match of the three-match T20 series in Ranchi on Friday. (ANI)