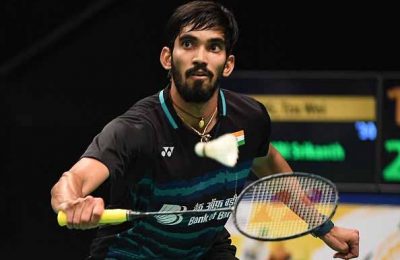 Bali [Indonesia]: Indian shuttler Kidambi Srikanth on Saturday faced a crushing defeat at the hands of Denmark’s Anders Antonsen in the semi-finals of the ongoing Indonesia Masters.Playing at Court 1, Antonsen defeated Kidambi in straight sets 21-14, 21-9 in a game that lasted 41 minutes. This was Kidambi’s second-consecutive semi-final appearance on the BWF World Tour after the Hylo Open, earlier this month.During the day, two-time Olympic medallist PV also bowed out of the tournament after losing to Japan’s Akane Yamaguchi in straight sets 21-13, 21-9 in 32 minutes.In the first set, Yamaguchi dominated the proceedings and easily clinched the essay 21-13 in just 20 minutes. Riding high on confidence, Yamaguchi started the set on a high as she led the game 3-1 before clinching the essay with a dominating win.