Women in Pakistan: Social Media & Literacy are the ‘hope’ for Change 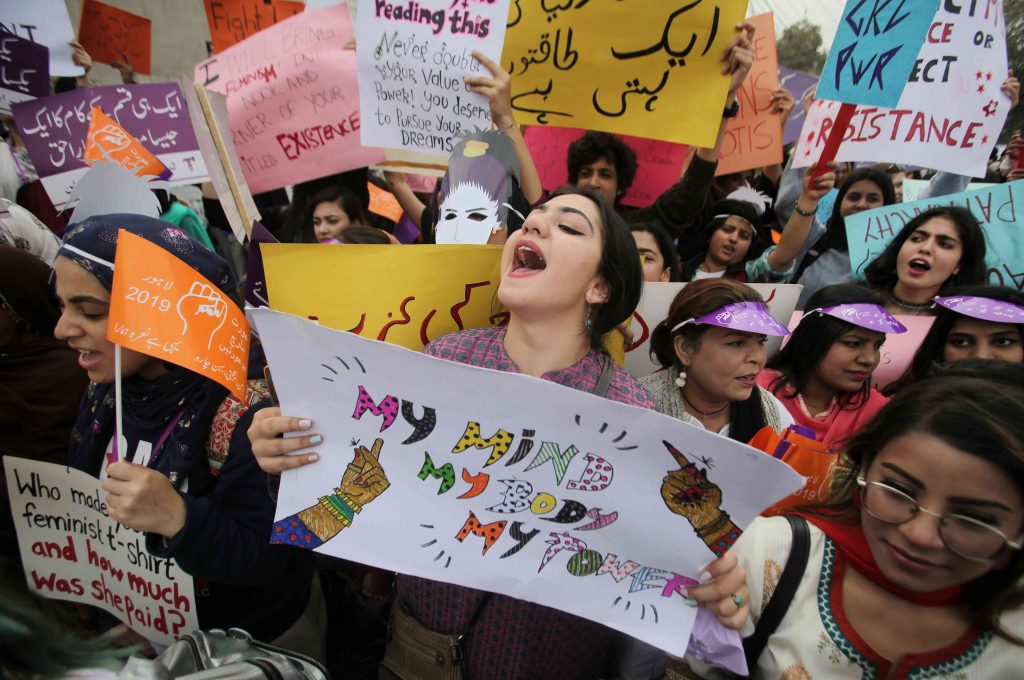 There appears to have been a surge in violence against women, but in truth it is nothing new. It is just that we are more aware of it now and more women are fighting back. The last few months have been particularly harrowing for Pakistani women.

From the horrific case of 27-year-old Noor Muqaddam, who was brutally tortured and beheaded in the nation’s capital on July 21, to that of Ayesha Ikram, a TikTok creator, who was harassed and groped on the country’s Independence Day by more than 400 men on the grounds of one of the country’s major national monuments, the Minar-e-Pakistan in Lahore – it feels as if violence against women has reached epidemic proportions.

Many are even calling it a “femicide” to draw attention to the scale of the problem and its systemic nature. But gender-based violence in the country is not new.

According to the 2017-2018 Pakistan Demographic and health survey, 28 percent of women aged 15 to 49 had experienced intimate partner violence in their lifetimes. This is a slight decrease from 32 percent of the women reported to have experienced physical violence at the hands of their partners in the 2012-2013. But given that domestic violence is an issue shrouded in secrecy and shame, both sets of figures are likely a gross under-estimation.

One suspects that it feels like there is a surge in violence because cases are getting more attention. Mainstream media is more attuned to the issue, and it is also being highlighted and discussed on social media platforms.

These conversations have created heightened awareness among young women in particular, who are becoming increasingly vocal about their rights. The vast majority of these women belong to the educated, urban middle and upper classes.

This is just the latest in the long history of the struggle against gender-based violence in Pakistan.

In the past, particular cases have drawn national as well international attention, leading to collective action by rights activists.

One such case was that of 28-year-old Samia Sarwar, whose murder was arranged by her family in 1999. She had been seeking a divorce from her violent husband, a decision her family did not support because it would have “dishonoured” the family name.

She was shot dead in the offices of Hina Jilani, a well-respected Supreme Court lawyer and human rights activist. Sarwar had been there for a pre-arranged meeting with her mother to receive the divorce papers.

Her murder started a national conversation about honour killings. Women’s rights activists, including Jilani and her sister Asma Jahangir, also a renowned human rights lawyer and activist, highlighted it to advocate for an end to gender-based violence.

But there were counter-protests from religious conservatives arguing that Sarwar’s feminist lawyers had no business interfering in a question of “family honour”. To this day, the perpetrators have not been brought to justice.

Another well-documented case is that of Mukhtaran Mai, who was gang-raped in June 2002 by four men in Meerwala village in southern Punjab’s Muzaffargarh district. Mai was raped on the orders of a village council as “punishment” for her younger brother’s alleged illegitimate relationship with a woman from a rival tribe.

And more recently, the murder of 26-year-old Qandeel Baloch by her younger brother in July 2016 for her “intolerable” behaviour, was a turning point for many younger feminists. Baloch was a social media star who was bold and open about her sexuality. Her murder set off a public debate around the question of women’s sexuality and victim-blaming.

While cases such as these make headlines every few years, their frequency seems to have increased during the last five years. There are a few possible reasons for this.

Female education rates are gradually on the rise in Pakistan, with the rate of female secondary education rising from 28.6 percent in 2011 to 34.2 percent in 2021. There is now a new generation of young educated women who have the awareness and confidence to demand their rights.

Additionally, as technology and social media have become more accessible, news of cases has started to spread more widely and at a much greater speed.

As of this year, almost 27.5 percent of the country’s population has access to the internet, mostly through their mobile phones. While this is much less than the global average of 60.9 percent, it is still significant for a country of 223 million.

Despite the fact that the country only has 2.1 million Twitter users, a relatively low percent, tweets are often featured by media outlets and are used to further discussions.

The state has also identified social media as a possible threat to Pakistan’s national image. Fawad Chaudhry, the country’s information minister, recently alleged that Indian and Afghan accounts were “falsely” creating the impression that Pakistan is “unsafe for women”, which he argued is part of an international conspiracy to malign the country.

With social media playing a key role in taking the conversation forward, women also face constant threats and harassment on these channels.

Conservative commentators and groups use these to counter the claims of feminists by arguing that Pakistan is indeed one of the safest countries for women – a claim also repeated by the country’s Prime Minister Imran Khan. In June, rights activists condemned Khan’s comment that, “If a woman is wearing very few clothes, it will have an impact on the men, unless they are robots. It’s just common sense.”

He later tried to backtrack on this, stating that only a rapist is responsible for their crime, but this too was couched problematically in a discussion about the need to lower “temptations” in society.

The last four years have also seen the emergence of Aurat March (Women’s March) in major cities across the country on International Women’s Day on March 8.

They were first held in 2018 in Karachi, Lahore and Islamabad, with hundreds attending. In 2019, they spread to Multan, Faisalabad, Larkana and Hyderabad, attracting thousands of participants.

While most of those who attend are from the urban upper and middle classes, organisers have been working towards making the marches more inclusive; encouraging transgender women to participate and providing transport for working-class women to make it easier for them to attend.

These demonstrations have highlighted gender-based injustices, such as domestic violence, sexual harassment, the undervaluing of women’s paid and unpaid labour, and lack of access to female healthcare. The issue of gender-based violence has consistently been front and centre.

The growth in popularity of these marches can also be attributed, at least in part, to social media, with much of the publicity and conversations before and after the march taking place on various online platforms.

Not part of the conversation

These certainly are all hopeful signs of resistance, however, the vast majority of women in Pakistan are still not part of these conversations and the movement. There is still a long way to go in terms of diversification.

For example, all of the high-profile cases mentioned earlier took place in the province of Punjab. Cases of violence against women from lower socioeconomic classes and from provinces other than Punjab, which has historically been the most economically and politically dominant province, rarely garner national attention.

Pakistanis living in the country’s peripheries complain that women’s rights activists rarely take up their issues.

Supporters of the Pashtun Tahaffuz Movement (PTM), which advocates for the rights of Pashtuns, the country’s second-largest ethnic group, highlighted the case of a woman in Khaissor a village in the former tribal areas of Waziristan. She was allegedly harassed by security forces, with the details of the case surfacing on social media in 2019. This case received very little attention, both from feminist activists and the mainstream media, due to the gap between women in urban centres and those in rural and remote areas.

Hence, while social media is helping to amplify the cases of violence against women, it has not been able to bridge the ethnic and class divides that have long existed in the country.

In addition to this, the vast majority of women in Pakistan still do not use social media at all. There is a 65 percent gap in digital access between women and men in Pakistan, the highest such gender gap in the world, and the women who have access by and large belong to the upper and upper-middle class.

Furthermore, as has historically been the case, progress on women’s rights is still frequently blocked by religious conservative groups, which often work in tandem with the state.

Most recently, the Domestic Violence Bill – despite being passed by the National Assembly to ensure legal protection and relief for victims – was stalled after an adviser to the prime minister recommended that it be sent to the Council of Islamic Ideology for review.

The victims of domestic violence continue to wait to find out what legal channels are available to them.

Despite the various hurdles that women’s rights activists face, from religious conservatives to the country’s ethnic and economic divisions, there are signs of a wider change in attitudes towards gender-based violence, and not just in the virtual realm.

After the Minar-e-Pakistan incident, for example, hundreds of young women and men descended on the same spot where the Tik Tok star had been harassed a week earlier, in a bid to proclaim women’s right to occupy public spaces.

On television talk shows, though largely dominated by male commentators, women journalists are increasingly vocal in their opposition to gender-based violence and are refusing to be silenced by male anchors and conservative commentators.

Feminists are also creating alternative forums for discussion. For example, a group of women journalists recently started a channel on Youtube called Aurat Card (Woman Card), a tongue-in-cheek reference to the misogynistic claim that women use their gender to gain “unfair advantages”. The show presents critical views on a range of social and political issues.

As a teacher, I have seen a change among university students during the last 10 years, where conversations about harassment are becoming increasingly frequent on campuses. However, with a female tertiary education rate of only 8.3 percent, even these conversations remain confined to a small section of the society, and that too in big urban centres.

So, while violence against women appears to be at a peak and regressive forces are as vocal as ever, there are positive signs that women, particularly those who are young and educated, are becoming more aware and vocal in their resistance.

Calling this a gender revolution may be premature, but a change is certainly taking place. The struggle for equal rights for women still has a long way to go, but the grip of conservative men is gradually being challenged and is loosening, and they have good reason to be scared.

Home » Views & Voices » Women in Pakistan: Social Media & Literacy are the ‘hope’ for Change
a
Menu