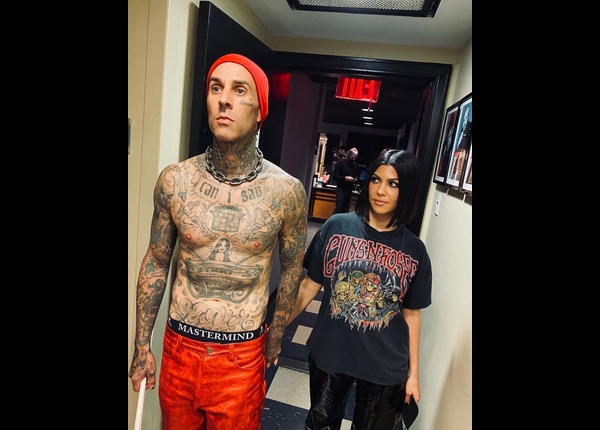 Kourtney shared a heartfelt birthday post for the drummer, calling him ‘her favourite everything’. Taking to Instagram, she also shared a carousel of sweet photos of the couple hand-in-hand alongside the special message. “I fu–ing love you more than anything. My favourite everything. Happy birthday to you my baby,” she wrote.

In the comment section, Travis replied, “You’re a dream come true, my soul mate my everything I LOVE YOU.”

Travis and Kourtney spent the night prior to the drummer’s birthday celebrating a different duo. They attended PR executive and family friend Simon Huck’s wedding to Phil Riportella. Kourtney shared photos of her and her beau with the caption, “Going to the chapel.”

As per People magazine, Travis popped the big question to Kourtney on October 17 on the beach in Montecito, California. The couple was surrounded by an elaborate arrangement of roses and candles when the Blink-182 rocker got down on one knee and proposed to his ladylove.

The outlet previously confirmed Kourtney and the drummer’s relationship in January. The couple later made their romance Instagram official in February shortly after Valentine’s Day.

The much-in-love couple hasn’t shied away from PDA in the months since they first went public with their relationship either.

In April, the pair went on a romantic getaway in Utah, where Kourtney captured a steamy shot of the two smooching in the middle of the desert. The couple was also spotted making out while attending UFC 264 in Las Vegas in July.

Insiders had previously told Us Weekly that the two are head over heels and very serious about their future together. In October, one source revealed the pair want another child. Kourtney shares kids Mason, Penelope and Reign with ex Scott Disick while Travis shares Landon, and Alabama with ex-wife Shanna Moakler.

“They will have a baby together without any doubt, it’s just a matter of when and how,” the insider said at the time.

“Ideally, Kourtney would like a natural birth. She’s confident it won’t be a problem because she’s always been lucky to conceive naturally and has taken great care of herself physically. … Certainly, though, she and Travis want to bring their own child into the picture, and if she can’t conceive, they’ll look at other alternatives,” the source added.