It’s A Wrap For ‘Bridgerton’ Season 2! 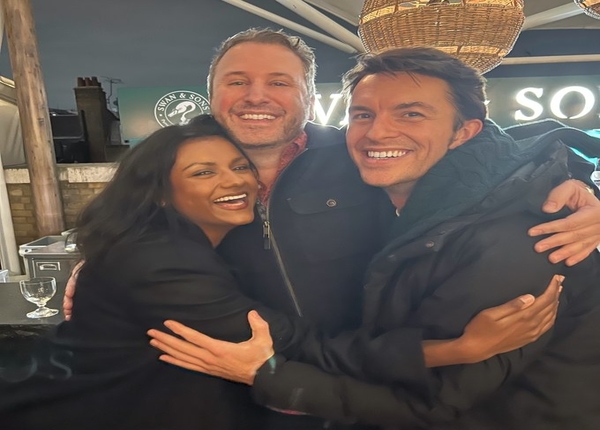 Buckle up ‘Bridgerton’ fans as the much-awaited season two of your favourite Netflix romantic drama has been wrapped up.

New pictures from the wrap-up party have been doing rounds on social media. Chris Van Dusen who serves as the creator, showrunner and executive producer of ‘Bridgerton’ took to his Twitter handle on Sunday and shared a picture of him hugging the lead pair of the upcoming season of the show–Jonathan Bailey, and Simone Ashley. “That’s a wrap on Season Two! So proud of this cast and crew who brought their A-games to work each and every day in this very challenging year. And these two in this photo with me right here. Words are not enough. Coming in 2022. #Bridgerton #SeasonTwo #BuckleUp,” he confirmed the wrap-up news on Twitter.

The Shondaland series is set in Regency-era London and the second season of the romantic drama will reportedly shift the focus from the love story between Daphne Bridgeton (Phoebe Dynevor) and Simon Basset, the Duke of Hastings (Rege-Jean Page) to Daphne’s elder brother Anthony’s romance with Kate. It will be based on Julia Quinn’s novel, ‘The Viscount Who Loved Me’.

Reportedly, viewers will see Anthony looking to find a suitable wife to settle down with, after he breaks up with his secret girlfriend, Siena Rosso played by Sabrina Bartlett. He will end up finding Kate- a smart, headstrong young woman who suffers no fools including her to-be on-screen love Anthony.

In the novel, Simone’s character is named Kate Sheffield. However, the show’s creative team previously decided her family would be of Indian descent and changed her surname to Sharma.

British Indian actor Charithra Chandran has been cast as Kate’s younger sister Edwina, who would be seen as the latest diamond of the first water.

On the other hand, the first season’s incomparable beauty Daphne Bridgeton, played by Phoebe is also reprising her role in the second season, without her Duke, played by Rege who announced his exit from the forthcoming parts of the series, in April.

Other additions to the cast for the coming season are Shelley Conn, Calam Lynch, Rupert Young and Rupert Evans, who will play Edmund, the Bridgerton patriarch.

The Netflix series has already been renewed through season four, so there is plenty of your period soapy obsession to come. Each season will be inspired by a different Quinn’s book in the series and will focus on each of 8 Bridgerton children.

Producer Shonda Rhimes has earlier revealed that the first season of the much-loved series was one of the long-awaited projects as part of the eight-show deal she made with Netflix in 2017.

Season one of the series was narrated through the lens of a mysterious gossip columnist, Lady Whistledown (voiced by Julie Andrews) who presented each episode with her famous opening line “Dear Readers…”

With a viewership of 82 million households, ‘Bridgerton’ has become the most-watched series on Netflix. The series reached No. 1 in 76 countries on Netflix. In January 2021, Netflix announced that the series was renewed for a second season.

However, in April 2021, creator Chris Van Dusen revealed on his Twitter handle that the series had additionally been renewed for a third and fourth season too.

The second season will premiere in 2022.