IPL 2021: New ball sat on the surface, it was ‘challenging wicket’ against KKR, says Williamson

After suffering a six-wicket loss against Kolkata Knight Riders (KKR) in the ongoing Indian Premier League (IPL) 2021, SunRisers Hyderabad skipper Kane Williamson said that the pitch was a challenging one and the new ball sat on the surface which made run-scoring quite difficult.

Dubai [UAE], October 4 : Shubman Gill played a knock of 57 runs as KKR defeated SRH by six wickets with two balls to spare. With this win, KKR consolidated its position at the fourth spot and the side now has 12 points from 13 games. “It was a challenging surface, it was hard to get your rhythm on because of the tennis ball bounce. Particularly with the new ball, it sat on the surface and I think it reflected in the low strike rates which have been quite interesting in the second half of the tournament. The surfaces have varied quite a lot and I think we have seen that teams which have been successful have been able to adapt to those surfaces,” said Williamson while replying to an ANI query during a virtual post-match press conference.
“For us against KKR, we struggled to do that. We got through the powerplay and there was an opportunity to build towards 140-150 total and obviously, we fell short of that. Once again, it is important for us not to overreact and overcorrect. It has definitely been a challenging season for us in that aspect,” he added.
Earlier, a spirited bowling performance helped KKR restrict SRH to 115/8 in the allotted twenty overs. For Eoin Morgan-led side, Tim Southee, Shivam Mavi, and Varun Chakravarthy returned with two wickets each while for SRH, Kane Williamson top-scored with a knock of 26 runs.
“I suppose, personally standing in as skipper in the second half of the tournament, you do try to have a collective focus. There are a number of things around the corner that can take the attention of the players but you know as a team, we are fortunate enough to be here. No doubt, I guess a lot of players are dealing with that, it is an interesting element to the modern game,” said Williamson.
“Umran Malik is a special talent, one of the silver linings of where we are which is certainly not desirable but we have been able to expose a number of younger players. Talent in India is immense, so many young guys are ready to go. It was great that Umran was able to get a chance against KKR,” he added.
SRH will next lock horns against RCB on Wednesday at the Sheikh Zayed Stadium.

Kolkata Knight Riders (KKR) skipper Eoin Morgan lavished praise on batsman Shubman Gill and said the side has done well in adapting to the slow conditions here.
Gill hit his first fifty in the Indian Premier League (IPL) 2021 as KKR defeated Sunrisers Hyderabad (SRH) by six wickets on Sunday. “The wicket played slower than we thought, than the wicket two nights ago. It swings early in the powerplay in these conditions, but it was sluggish. We needed to bowl and field well and we did,” said Morgan during the post-match presentation.
“Shubman played extremely well and led the chase. The depth of the squad to be able to call Shakib is a huge luxury, so he has had a huge impact. We didn’t know it wouldn’t be played in India, and we have done well in the conditions and adapted well,” he added.
KKR needed 116 to win in the 20 overs but SRH bowlers made sure the Morgan-led side had to fight it out for the win. SRH battled hard to try and get a win, but the target was always too small.
“We are focussed on playing good cricket and we’ve done that in the last three weeks. The game plan has had a good impact in the dressing room and guys are putting their hands up. We have done well to adapt to the slow conditions and I’m happy with that,” said Morgan.
KKR chased down the target with two balls to spare. The side now has 12 points.

Very lucky to have Narine and Chakravarthy, they are impact players: Morgan

Dubai [UAE], October 4 : Kolkata Knight Riders (KKR) skipper Eoin Morgan said that he is confident of returning to form and giving match-winning performances for his franchise in the ongoing Indian Premier League (IPL) 2021 season.
Shubman Gill played a knock of 57 runs as KKR defeated SunRisers Hyderabad (SRH) by six wickets with two balls to spare here at the Dubai International Stadium on Sunday. With this win, KKR consolidated its position at the fourth spot and the side now has 12 points from 13 games. “I think two big impact players for us (Varun Chakravarthy and Sunil Narine). We are very lucky to have them, particularly Sunil Narine, he has been a huge part of this franchise for a long time, an integral part of KKR’s success. Game on game basis, you have a look at where they can have the biggest impact in the game and you try to get them in that position,” said Morgan while replying to an query during a virtual post-match press conference.
“The match against SRH was a good example, we are fortunate enough that the other guys in our bowling group bowled extremely well and that allowed us to juggle things around,” he added.
Talking about his own form, Morgan said: “Yeah, I am short on runs in the whole tournament. I am very lucky to be in this position but I have been through these kinds of stages in my career. The longer you go without contributing, the closer you are to actually contributing. That is just coming from experience.”
Earlier, a spirited bowling performance helped KKR restrict SRH to 115/8 in the allotted twenty overs. For Eoin Morgan-led side, Tim Southee, Shivam Mavi, and Varun Chakravarthy returned with two wickets each while for SRH, Kane Williamson top-scored with a knock of 26 runs.
“I think the purpose of T20 cricket is to be our most entertaining format, to make it appealing to a wider audience. That element of pure cricket was in the wicket for the match against SRH. If the bowlers bowled in the right areas, they got their due reward and the batters had to work a little bit harder. Sometimes in T20 cricket, it is good to have that element,” said Morgan.
“I am delighted for Shubman Gill, he has shown a great amount of promise in all formats of the game. Probably over the last two IPLs, he has continued to shown promise. On a tricky wicket against SRH, he made it look quite easy,” he added.
KKR will next square off against Rajasthan Royals on Thursday at the Sharjah Cricket Stadium. 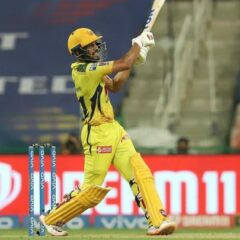