Dozens of people died in flooding in Europe triggered by rainfall ‘not seen in 100 years’. At least 46 people have died due to severe flooding in western Europe, caused by what experts described as the heaviest rainfall in a century. Up to 70 people are missing in Germany after flash floods swept across western and southern parts of the country, causing buildings to collapse, police said Thursday. Germany is worst hit with 40 people killed, while six people died in Belgium. Luxembourg and the Netherlands are also affected. “In some areas we have not seen this much rainfall in 100 years,” Andreas Friedrich, a German weather service (DWD) spokesman. He added that “in some areas we’ve seen more than double the amount of rainfall which has caused flooding and unfortunately some building structures to collapse. “The German village of Insol in Rhineland-Palatinate is inundated after massive rainfall. 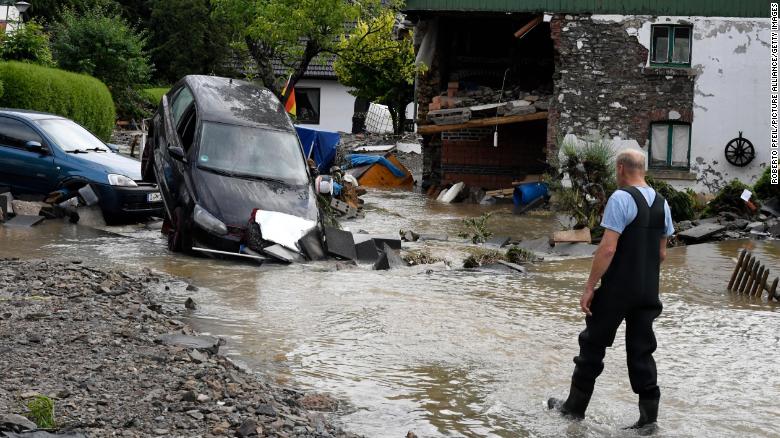 A resident of North-Rhine Westphalia examines the damage on Thursday. The German regions of North Rhine-Westphalia, Rhineland-Palatinate and Saarland were worst affected, Friedrich added. German Chancellor Angela Merkel, who is on her swansong visit to Washington DC, said the deadly floods that have hit some parts of her country are a “catastrophe” Here in Washington, my thoughts are also always with the people in our homeland,” Merkel said at a press conference on Thursday ahead of her meeting with US President Joe Biden. “Peaceful places are going through a catastrophe in these hours, one can say a tragedy. Heavy rainfall and floods are very inadequate words to describe this — it is therefore really a catastrophe. ”Merkel said the focus is currently on the rescue and immediate response to those affected by the floods, but added that she was in close contact with her country’s finance minister, Olaf Scholz, to work on a strategy for longer-term financial aid to help with recovery. “I mourn for those who have lost their lives in this catastrophe — we do not yet know these numbers but there will be many,” she added. Merkel’s spokesman Steffen Seibert offered condolences to the families of the victims. “I am shocked by the disaster that so many people in the flood areas have to endure. My sympathies go out to the families of the dead and missing,” Seibert wrote on Twitter. 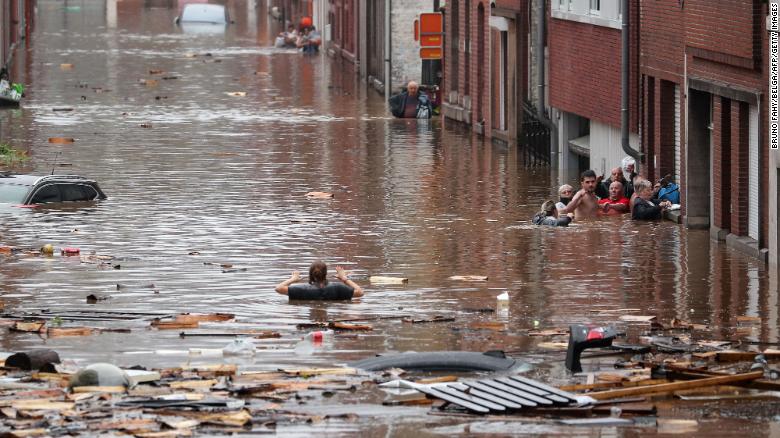 A woman tries to move in a flooded street following heavy rains in Liege, Belgium. Merkel’s visit is likely her last to the US before stepping down as Chancellor in the fall after 16 years in power. Armin Laschet, the premier of North Rhine-Westphalia and the Conservatives’ candidate to succeed Merkel, visited affected parts of the region on Thursday. “We will be faced with such events over and over, and that means we need to speed up climate protection measures, on European, federal and global levels, because climate change isn’t confined to one state,” Laschett said. In neighboring Belgium, at least six people died in floods in the southern region of Wallonia, citing the magistrate on duty at the Verviers prosecutor’s office and the governor of the Liège province. The Wallonia region borders North Rhine-Westphalia. The floods have also disrupted Belgium’s national railway network, Infrabel, stopping services in the French-speaking south of the country, the company said Thursday in a press release.

DWD spokesman Friedrich said the downpours were caused by cooler and warmer rainfall mixing. “It came from France at the beginning of the week to Germany and has been sitting over Germany for the last 48 hours,” he said. “For now we predict the worst of the torrential rainfall is over, though more heavy rain is due in southwestern Germany on the upper reaches of the Rhine,

Home » International » Europe » Dozens of people died in flooding in Europe triggered by rainfall ‘not seen in 100 years’.
a
Menu