CHAMPIONS LEAGUE-: PSG in another poor collapse as BENZEMA embarrasses the French Champs!

Real Madrid completed a comeback via Benzema against  PSG on an epic CHAMPIONS LEAGUE  night .

We are the kings of Europe, read the huge banner that ran behind the south goal at the Santiago Bernabeu. With Karim Benzema leading from the front, Real Madrid certainly played like it to knock Paris Saint-Germain out of the Champions League.

In Kylian Mbappe, the French side have most people’s pick for the best player in Europe right now. But Benzema now has 30 goals for the season and a fair claim to the crown, too.

His brilliant second-half hat-trick — including two in two crazy minutes — turned this game on its head after young pretender Mbappe had looked to have put the tie beyond Carlo Ancelotti’s side.

The old fox was left smiling at the end. His opposite number Mauricio Pochettino surely faces the sack sooner rather than later. Lionel Messi’s arrival was supposed to bring the club its first Champions League title. As it is, they will not even be in the quarter-finals.

Lots gets said about PSG’s front three being an indulgence that the other eight players in the team can ill-afford. But when it works, it works so breathtakingly well that it is hard to imagine there are too many complaints in the dressing room.

Neymar’s first-time pass over the top of Madrid’s defence towards the end of the first half was glorious enough — and when Mbappe raced on to it you sensed something even better was about to come. 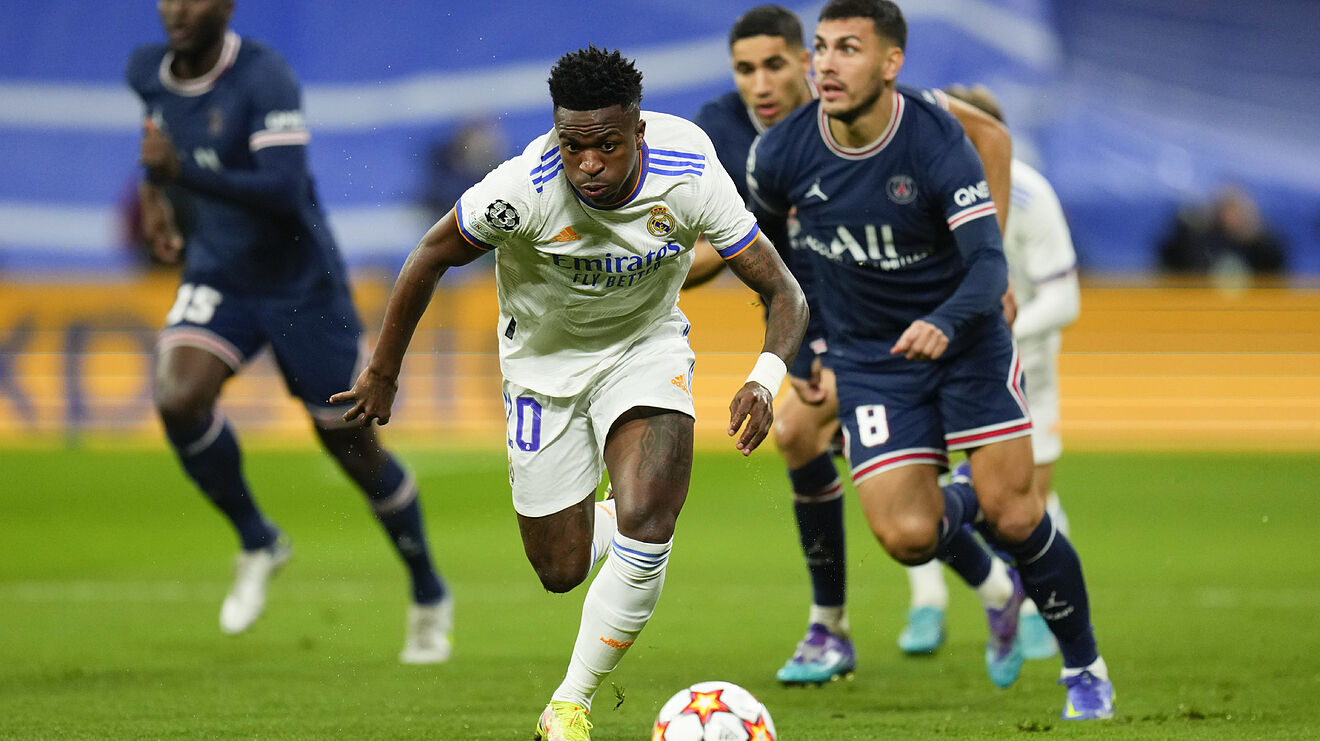 The 23-year-old had already been denied on several occasions by the towering figure of Thibaut Courtois, but that didn’t stop him shooting early, hard and low, to give PSG the lead on the night and double their advantage over the two legs.

Others might have continued the sprint towards goal, but not Mbappe. He could see enough net between Courtois and his near post to let fly and PSG had the goal that their first-half performance deserved.

But that illustrious front three stood and watched as Madrid hit Paris Saint-Germain with a stunning comeback in the second half to charge through.

Thousands of their fans had lined the streets around the stadium to welcome the team bus before the game. But despite the flares, the waved phones and the songs about their various Champions League conquests, there was a reticence every time the chant of ‘Yes we can’ went up.

This was a big task, made more difficult by the absence of Casemiro and Ferland Mendy and the mere presence of the man they are convinced they will sign in the summer, Mbappe.

But belief grew at the start of the game when Vinicius Junior crossed for Marco Asensio and the forward saw his shot saved. Vinicius then dribbled inside and found Benzema, but Messi broke things up on the edge of the area and when he released Neymar, PSG were away.

Mbappe finished the move off but Courtois saved his shot.

Courtois saved again from PSG’s leading scorer, this time after he had capitalised on a mistake from Eder Militao. The goal was coming — all the warning signs were there.

On 34 minutes, Mbappe had the ball in the back of the net.

He celebrated the emphatic finish in front of Madrid’s supporters, but by the time he had turned back to his team-mates the goal had been ruled out for offside against Nuno Mendes.

He was not to be denied, though — and from that superb Neymar pass he buried the very next opportunity to send his team 1-0 up at the break.

Mbappe had the ball in the back of the net again at the restart but again the flag was raised for offside. He was enjoying himself and there was little, within the rules of the game, that Real Madrid could do to contain him.

Dani Carvajal shoulder-charged him off the side of the pitch and earned a yellow card. If he hadn’t, he might have been watching from a distance as Mbappe got the second. 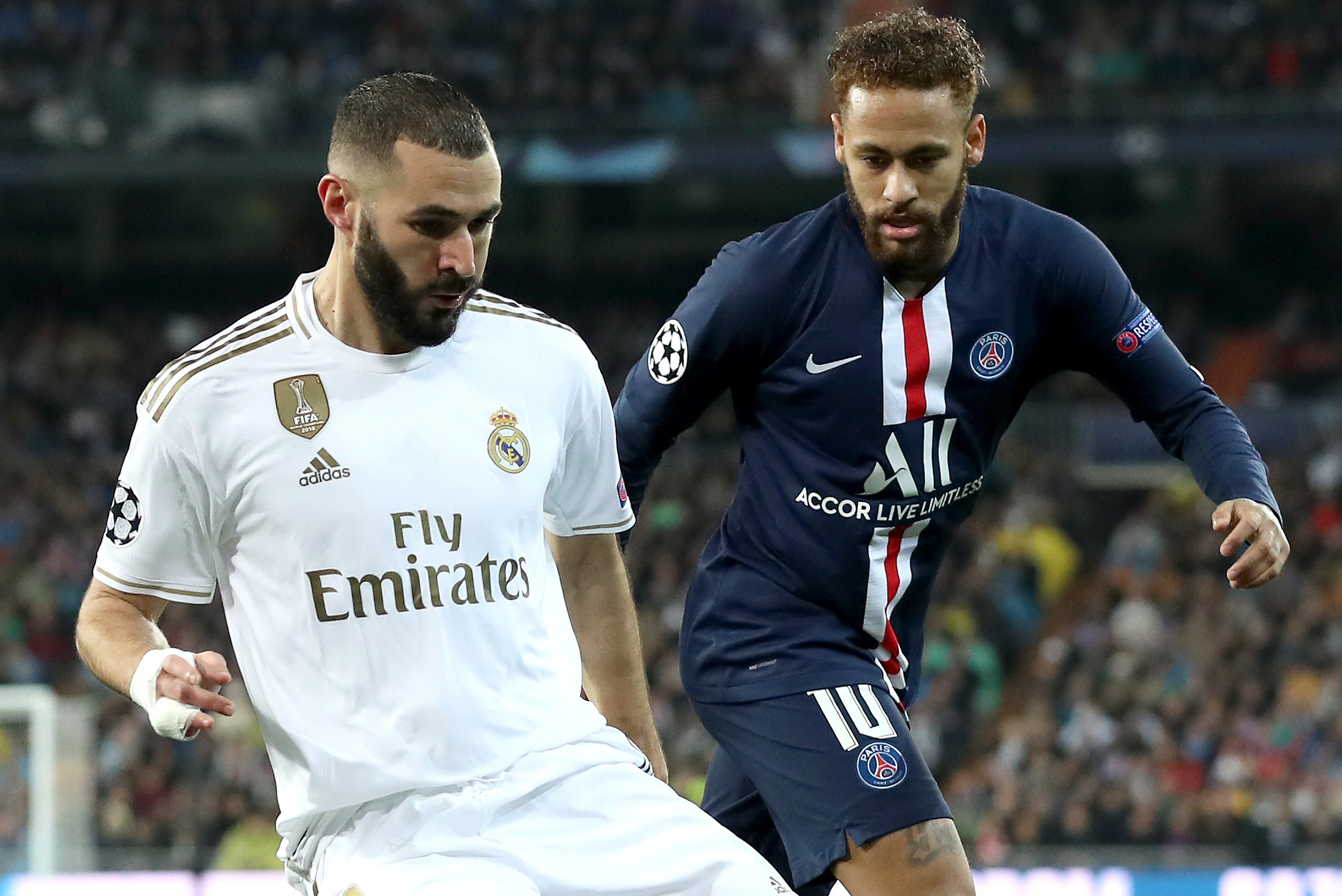 As it was, Madrid scored next. When Benzema robbed Donnarumma on his line, Vinicius latched on to the loose ball and gave it back to the Frenchman to score.

PSG’s goalkeeper came out of his area to complain to referee Danny Makkelie but it seemed like a gesture born more of embarrassment than a belief that the decision would be changed.

The three tenors at the other end of the pitch looked back at the keeper’s bum note. Madrid were right back in it. Now the Bernabeu really believed and, with Rodrygo and Lucas Vazquez’s energy from the bench, they were starting to test PSG’s defence. Benzema made it two when Luka Modric slipped him through after fine work from Vinicius.

His hat-trick, and the comeback, was completed straight from PSG’s kick-off when Vinicius bullied his Brazil team-mate Marquinhos into a mistake, inadvertently feeding Benzema — who made it three with another unerring finish.