In the constant sludge of dreary, dark, overly dramatic, childish subversion of expectations that is nothing more than a pathetic attempt to grab some more eyeballs and be the talk of the town, you can’t help but feel numb to Hollywood’s next release Bullet Train. The expectations are in the mud even if Brad Pitt is coming to town.

However Bullet Train turns out to be a fun ride not an intelligent one but certainly entertaining like the action movies of the 2000s. With some funny moments and some dull ones the film certainly provides the thrills you’d want and expect from an action film.

Brad Pitt stars as a hitman codenamed Ladybug. He hopes the moniker will end his streak of bad luck and muffed-up missions. But that isn’t his only problem – the man has lost his appetite for acts of killing, having stumbled upon the benefits of the pursuit of peace – both inner and worldly.

His handler Maria Beetle (Sandra Bullock), who issues directives in the protagonist’s earpiece, talks him into accepting the seemingly harmless, snatch-and-grab job of retrieving a briefcase from the bullet train. Ladybug isn’t exactly Maria Beetle’s go-to man. Her first-choice operative is down with a stomach bug, leaving the handler with no option but to fall back on Ladybug. No sooner does Ladybug half-heartedly hop on to the train – and without a gun at that – than he figures out that there are several other assassins on board with varied objectives but overlapping motives.

As said, this isn’t a smart film at least not all the way through, but its clever enough to not take itself seriously or shove any diversity and social messaging across which is rare these days from mainstream Hollywood. Instead it moves the story along at a break neck speed which serves us good because it keeps the story going, the plot drives forward keeping things interesting, the colorful characters keep us engaged by popping up at regular intervals never letting the film feel repetitive.

The pacing is a detriment as well as it doesn’t really allow much development to the characters who are in large numbers. Except Yuichi Kimura (Andrew Koji) and his dad and the whole backstory of the gang his father belonged to. This is also a story about fate and luck and how trying to control fate is an act of foolishness. Brad Pitt makes up for the lack of development his character gets and is enjoyable as ever. The film can get a bit disorienting as its got a lot packed in it. 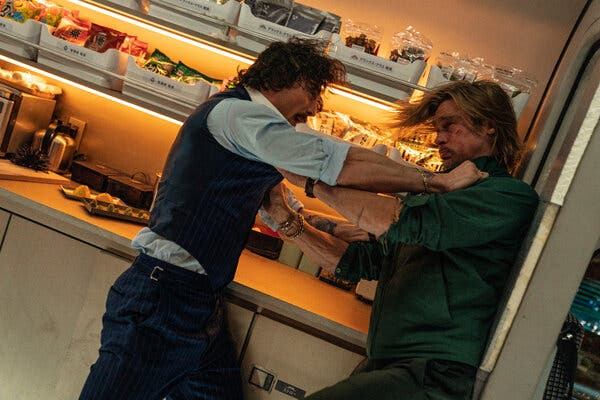 The film has the over the top violence and action with blood being a constant in almost all the fight scenes which are done pretty well. With witty one liners and frequent doses of humor sprinkled throughout it never lets the action become dreary or dark it keeps you entertained without having to worry about the humans being destroyed.

Towards the end though the film almost becomes ludicrous bordering on insanity but thankfully the Bullet Train stops and brings everything to a close. Its fun and engaging if you just let yourself go but if halt and think about all the subplots and the countless backstories that are supposed to be tied up together you may find yourself losing interest as everything  may seem to break apart and not make a whole lot of sense.

Despite all that Bullet Train is a fun ride, a decent film one that won’t revolutionize cinema or something but will provide you a decent dose of entertainment, and unfortunately with Hollywood’s current state of constant social pandering this is much more than what you could have asked for.