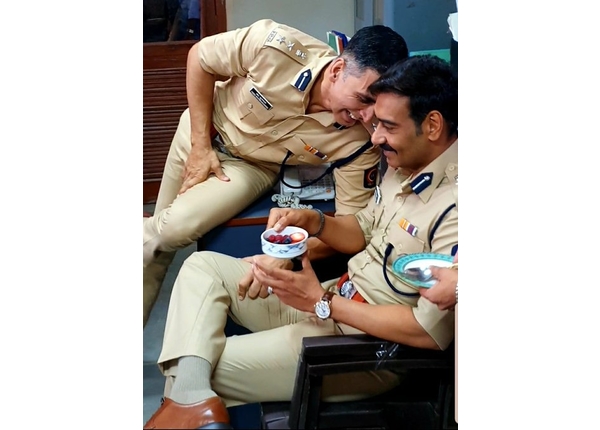 Megastar Amitabh Bachchan, who will soon be seen with Ajay in the film ‘MayDay’, took to his Twitter handle and wrote a post filled with love and blessings. “T 4103 – #AjayDevgn, completes 30 years in the Film Industry, on 22nd Nov, when his film ‘Phool Aur Kante’ released. Soft-spoken, non-interfering, yet filled with passion. My congratulations Ajay, may you continue for another 70,” he tweeted.

Superstar Akshay Kumar took to his Instagram handle and shared a BTS picture with Ajay from the sets of ‘Sooryavanshi’ in which the two can be seen laughing together.

Akshay further penned a special caption, remembering their early days in the industry.

“Mujhe yaad hai when as newbies, main aur tu saath saath Juhu beach pe martial arts practice karte the when your dad used to train us. Kya din the yaar @ajaydevgn , and just like that it’s been 30 years to #PhoolAurKaante. Time flies, friendship stays,” he wrote.

Anil Kapoor took to the comments section of this lovely post to express his admiration for his ‘Total Dhamaal’ co-star.

He wrote, “Was there to wish you on your premiere night.. saw your close up and your eyes as soon as I entered the auditorium and I just knew he’s a star. congratulations on 30 years Ajay…”

Ajay Devgn began his career with the film ‘Phool Aur Kaante’ in which he starred opposite Madhoo.

Ahead on the work front, the superstar has multiple exciting projects in the pipeline including the slice-of-life comedy ‘Thank God’ co-starring Sidharth Malhotra and Rakul Preet Singh and sports drama ‘Maidaan’. In the film, Ajay will be seen essaying the role of the legendary coach Syed Abdul Rahim, who is widely known as the founding father of Indian football.